the light catches
where the truth hides
fractures in the cold
oppressive world
that let magic seep out
in tiny droplets
missed by so many
but those in the shadows see
for you can find so much
in the dark
without the distraction of
melody and mock joy that
cascades around those
who pitch their eyes to
stare at the sun
instead
find the broken bulbs
glints of pleasure from seeing
beauty
where it has been forgotten
isn’t a rainbow that much more beautiful
because of the storm
it is forced from?
the stars that much more
breathtaking
for the vast darkness they
somehow penetrate?
I think I’m there
somewhere
in the sparks and colors
I may disguise myself
in these layers
of ordinary and plain
but, no
know me
I am brilliance inside this
dreary grey facade
and if you crack the clay
even for an instant
peer through the
darkness
you might see the secrets
the magic inside
see what others
don’t even look for
it may mean nothing
in that moment
but when you find
light
it is yours to hold
to make your own magic
forever

with your back turned
eyes and mouth
closed
to hold in your
truth
your desperation
careful now
the pieces are fragile
even where you’ve
cut others
with its crystalline
blades
don’t let them
puncture
your spirit
but
tuck it all
back inside
close it up
put it away
don’t feel, don’t cry, don’t breathe

Sheet of hair, brushed to a sheen

And this coat of capability

That I use as an

You never see me

Waging war for an unwanted life

You only see the smile

That it’s the truth

You bask in my responsibility

While I bleed under the blade of your

Leave me be, let me drain

You can’t see me dying 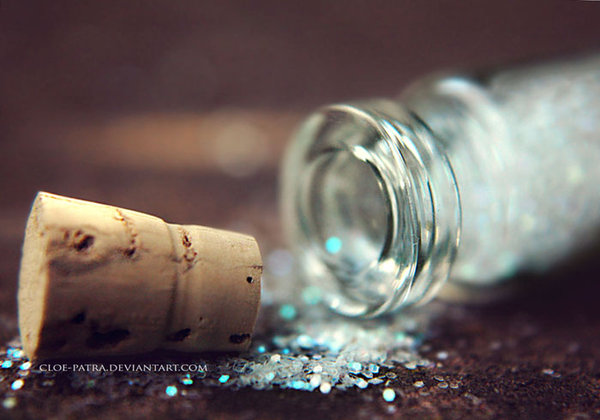 She stands in the hall, unseen, unheard.
Like a child. Frightened with no reason. Intimidated by no-one but herself. Swallowing back tears and trying, painfully, to somehow stuff down the fear.

He sits, still and silent. He knows she’s there, just out of sight. He wishes he had whatever it is she needs to open up and let him see.

If he goes to her though, she will run. She will smile and pretend. He knows her. He’s seen her do it a thousand times. He understands why she locks herself in a bottle, because he does it as well.

If he pushes, the cork will become wedged, and nothing will budge it until the pressure becomes too much. Only downward force could change that.

He knows that’s exactly what she’d like him to do. To drill out the cork, smash her bottle, force her open. But, he cannot bring himself to break her.

She needs to open on her own. To release the cork from within. To surrender without coercion.

He watches quietly as she rounds the corner. She glances up at him, making her way quickly into the room, but pulling her gaze down as she kneels before him, and lays her cheek on his knee.

He sits for a moment, wishing he had all the answers, wondering if he’ll ever understand his girl. His sweet wife.

Remembering her need for his touch, his hand lifts to stroke her and his fingers slip into her silky tresses.

She sighs, and her body relaxes. He moves his other hand to shift her so he might see her face. As he does, he watches a tear escape and brushes it away with his thumb.

He stares at her and she gazes up at him, into his eyes. She remains mute, but he knows. He sees her.

“Thank you for not hiding,” he whispers as his fingers weave through her hair.

She exhales slowly, and her eyes clear.

Perhaps this is all she needed.

His patience will help her find her voice. They are, after all, the same bottle. Just with different contents.

Undoubtedly, he will find a way to return her true smile. His way. He knows her, knows what’s under the cork. He sees her, even if the glass is cloudy.

He feels her surrender. And eventually, he will find a way to properly use it. To combine the contents of their bottles. To become one.

He’s sure that is what she wants more than anything. To be part of a whole, to be part of him.

If she can stop hiding, so can he. And perhaps he can break both of their bottles, permanently.